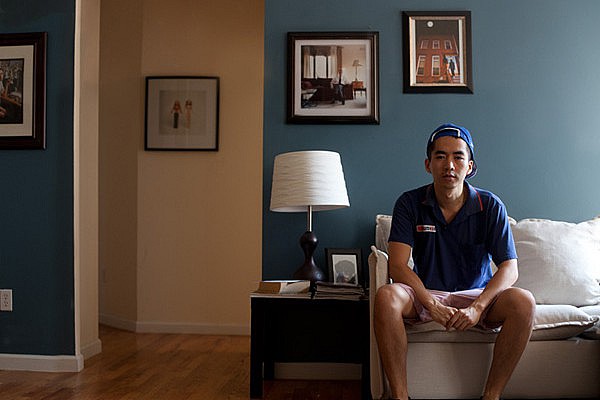 They’re black, white, yellow and come packaged in blue jeans, bow ties and pressed suits. This past May, Kevin Truong (pictured above) began posting these sometimes disparate photos he captured, while exploring the likes of Portland, Ore., and New York City, and in doing so kicked off a project to document a world many still view as steeped in darkness. The images are of nothing heinous and, Kevin admits, might seem pedestrian if looked at for too long. They are photos of men. Gay men. And Kevin catalogs their normality.

Two months pregnant and fleeing a ravaged Vietnam, Kevin’s mother took a fishing boat to Kuala Lumpur, Malaysia, in 1982, where she would later give birth to him in a refugee camp. After a stint in the Philippines to learn American culture, he, his mother and two sisters crossed the ocean to their new home in the Pacific Northwest. Through that journey, he and his mother grew close. “My mom is probably the most important person of my life,” he says via telephone, “and I didn’t want to have to hide that part of myself from her.” 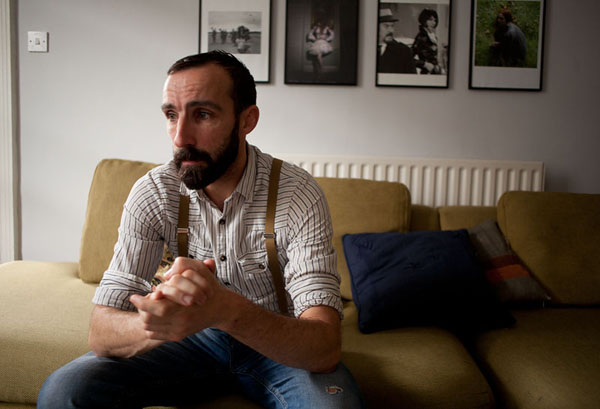 Kevin is a gay man currently finishing his senior year at the Pratt Institute in Brooklyn, N.Y. After first receiving a degree in economics and working in the non-profit sector, before a stint with AmeriCorps, Kevin joined the Peace Corps. Assigned to Belize, Kevin was a bit skeptical of its anti-gay laws, which include imprisonment for homosexual acts. After three months of “having to go back into the closet and hide that aspect of my life,” Kevin returned to the states with little direction, save for a Canon Rebel bought for his journey abroad. Following a few courses at a community college in Portland, he headed for New York City.

Kevin was 22 when he started coming out to friends and says it’s a “lifelong experience” that’s “always evolving and changing, and I’ll always have to work through.” One of the most important parts of his coming out story was to his mom.

“At the time, I was 26 or 27 and she, at the time, was 55 or 56,” he begins. “You have a 56-year-old Vietnamese woman, and I remember having this conversation where I’m coming out to her, and I can physically see it on her face, as she was trying to process it. And she looked so confused. And she told me … that when I told her I was gay, she had no reference to that. She was trying to visualize what I was going to look like – if I was going to change visually – because she didn’t have a lot of reference then. And that’s kind of my inspiration for this project. I’m trying to give a reference to people like her who may not have any insight into what a gay man looks like. And what I’m really trying to show is that there really is no look.” 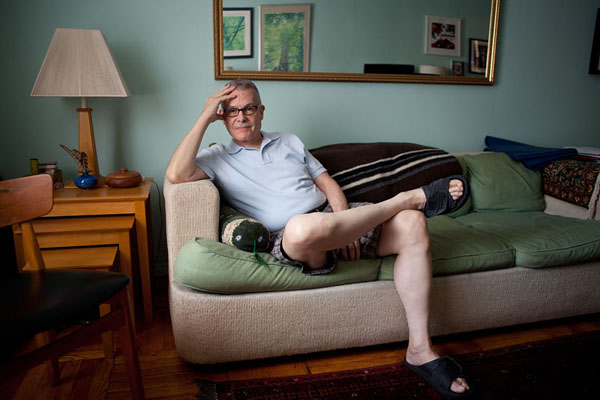 Scrolling through the pages of photographs at TheGayMenProject.com, you wouldn’t know you were looking at anyone in particular. The faces are sometimes recognizable, like Portland Mayor Sam Adams, and less often campy, in the sense of drag. Some are CEOs in business attire in million dollar homes, while others are students with hipster mentalities living in dormitories. The only underlying commonality between these men, Kevin says, is that “we’re gay. And there are some interesting characters, but when you look at it as a whole, we’re just individuals.”

Recently, Kevin asked his mother to write down her feelings about his being gay and their relationship. He posted it to his photo blog August 21, which is from where this excerpt is taken:

“I told Kevin that if you want my honest opinion, I would tell him that if everyone in the planet was gay then it would be the end because no one would have children. However, God didn’t create it that way, because your group is a small group, and they are like a group of the same type of trees standing strong together under this universe, and they are no different than the other trees. All the trees need the same basic needs for survival. They need water to nutrient them, and they want to be recognized by other groups because they were also creations from the same Lord and in the same planet.”

“When I told her I posted the blog up and showed her the responses she was getting from this blog, she was pretty at a point where it was kind of a pride,” he says. Other responses to the blog often surprise him because they come from, not gay men, but straight supporters and people who are interested in seeing what a gay man really looks like outside of the media’s often one-way interpretation of gay.

“The way I envision this project, it really is the entire gamut because there is an entire gamut. If I was just kind of showing the good looking, muscle-bodied gay, I might get more hits because those guys are better to look at, but it wouldn’t be serving my purpose. … I feel I get the most heartfelt responses from people who aren’t even gay because they’re interested in seeing this catalog of gay men, and I feel like it’s important to be as diverse as I can because I feel like, otherwise, it wouldn’t be a genuine catalog. It’d just be like everything else that is out there.” 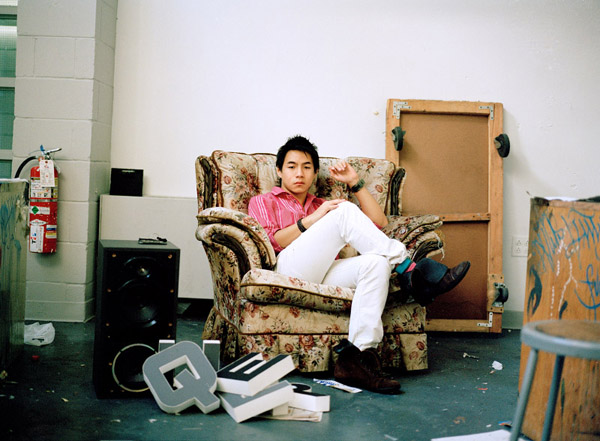 In the coming months, Kevin plans to head to Panama City, where an acquaintance he met in San Francisco is set to show him the gay life the region offers. He hopes to continue broadening his reach into what constitutes a gay man. This includes reaching out to people in parts of the United State’s South, which is among the most conservative group of states in the nation, and to people of varying socioeconomic and ethnic groups. A contact in Louisville, Ky., might be on the list, he says, and one from Tambov, Russia, recently posted his story to Kevin’s blog. The gay male experience isn’t limited to one facet of life, just like the Asian-American community isn’t relegated to one ethnic group.

When asked what it means to be gay and Asian, Kevin says he never really thought about it before. He says he thought being gay, like being Vietnamese-American, meant only the dictionary definition, period. “But as I’ve gotten older,” he says, “I just realize, by virtue of the fact of being gay and by virtue of the fact of being Asian, it just colors my perspective on life in ways that I may not even know. Being gay and being Asian have so much to do with 1) how I’m received by the world and 2) how I receive the world. So it’s how people look at me and how I look at people. It’s just kind of like who I am.”

As the Gay Men Project continues to grow, Kevin continues to make plans. He’s sees the project as having the potential to become a true resource for people interested in gay male sociology. How it will grow into this resource, he admits, he’s not sure yet. But he is certain it’s something he’ll continue after graduation next May. One dream he believes is attainable with the project is having a gay men congress at a gallery, where his printed photos will hang frameless alongside “as many of the men [from the project who] could show up” in order “to see in person the diversity…” 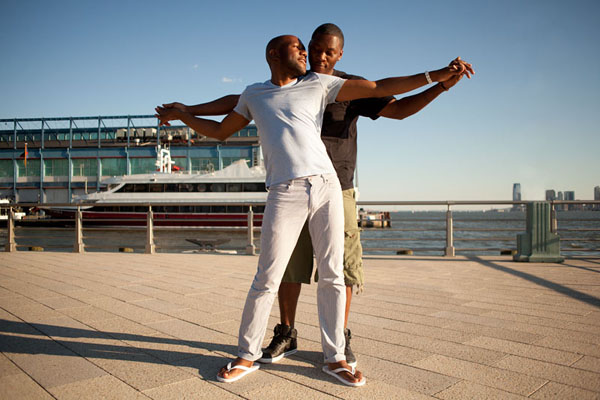 Kevin says this is his favorite photo, “Aunsha and Michael. New York City.,” because of the love these two men emanated. Photo: Kevin Truong

For now, Kevin is finishing his degree and tries to take at least one photograph for his project each day. The men featured started in his network of friends, but he says he’s begun reaching out into the larger community, through Craigslist ads and word-of-mouth referrals. “I want it to be worldwide,” he says. But perhaps the greatest impact of the project has been closer to home, with the relationship he’s able to now share more completely with his mom.

“She’s not proud to have a gay son,” Kevin says. “But she’s definitely very accepting… I think this project has allowed us to have a discourse, which is really what I’m trying to do. I’m just trying to get people to talk about it. And I want them to be honest.”

For more information about the Gay Men Project and to offer yourself for photos, if applicable, visit http://www.thegaymenproject.com.