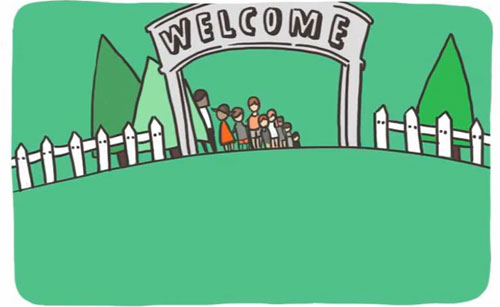 Cleveland isn’t want for vacant lots. Like its Rust Belt sister Detroit, Cleveland was ravaged by urban sprawl, “brain drain” and the regional collapse of industry. But a growing group of people are capitalizing on the city’s lack of expectations to transform it into a growing metropolis full of surprises.

Two of those people are urban planner and entrepreneur Kauser Razvi and artist Julia Kuo (whom you may remember from “Painting a Neutral Character”). Together, these women are hoping to transform four abandoned lots into living, breathing books.

Their project, called Literary Lots, looks to turn up to four empty spaces adjacent to local libraries into six-week art installations celebrating a different children’s story. Partnering with local artists and urban reclamation specialists, the team hopes to uplift these blights of abandoned suburbia by sharing the process with others.

If you’d like to contribute to the duo’s Kickstarter campaign — which already has 85 percent of its goal met in the first 10 days — you can do so before the March 30 deadline. Also contact Razvi through the Kickstarter page if you’d like to volunteer time and other services for this creative endeavor.

For transparency, I met Razvi while a participant in Bizdom Cleveland’s entrepreneurship program, Bizdom-U. I’ve also purchased artwork and a book Kuo collaborated on outside the realm of any articles.