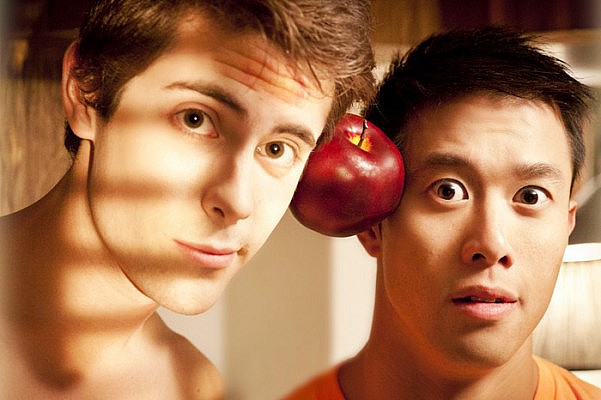 You know how it starts and how it ends. Boy meets boy; they like each other and just don’t know it yet. By the time you’ve heard the fifth ‘80s electric drum track they’ve realized they’re happily ever after, but not before a few ill-constructed lewd jokes are had at the audience’s expense. If you’ve ever been awake at 3 a.m., bored, and browsing Netflix, it’s not hard to catch on to the cinematic patterns of typical “gay” cinema.

But without sounding too hipster about it, you won’t find John and Jack in your Netflix queue for a very good reason: it’s everything the male-on-male community has been asking for in a romance flick for the past two decades. Hell, a gay-white-boy-gaysian romance is what everyone has been asking for.

Being the twenty-something, man-kissing guy that I am, I have nine times out of ten regretted playing Eating Out III or even Weekend late-night in my room. Afterward, I feel considerably dissatisfied or slightly depressed and awkwardly lonely. The impossible expectations of heteronormative, Hollywood relationships transposed onto two guys falling in love started to get old circa 1998.

Thankfully and immediately, during the opening sequence of John Apple Jack, I thought to myself: “finally, a gay romance film I’m going to enjoy,” and let me tell you, there were so many good things to do enjoy I can’t possibly list them all, or them, here.

The entire cinematography, typography, and general style of the piece is extremely clean, flat, and pleasing to the eye, like an Apple-designed product. The juxtaposing of visuals and audio brings attention to modern social issues in a poetic manner most can relate to. If you can also get behind a lower-than-average budget indie film, you’ll especially enjoy the production team’s execution of this story.

To be honest, there were a few moments here and there where the acting and plot felt slightly forced, pedestrian, or unbelieveable and amateur. However, the direction of the cinematography, the video editing, the beautifully synchronized soundtrack, and each actor’s commitment to his or her character made me love it anyway. I think this is what some people call “character” or “charm,” which I would take over a blockbuster’s high production budget any day.

I don’t want to spoil anything for you prospective viewers, but this movie was also surprisingly relatable. The main character, John (Chris McNally), wants to be seen as a loving, committed boyfriend, “not as some rich, gay slut-whore who gets everything he wants.” If you’re thinking, “Oh, God. That’s me,” don’t be embarrassed, honey — it’s what we’re all thinking.

Not only to men who resemble the main actors the movie is portraying but — despite your incessant need to redefine and relabel yourself based on with whom you do your naughty business — anyone can relate to the fundamental phenomena of two human beings having a romantic connection. Their story doesn’t skip all the family-friend drama that comes along with trying to make that connection last, either. John and Jack (Kent S. Leung) are just simply men who like to have sex with men, and I felt their characters really broke away from any typical gay male stereotypes. As John’s father puts bluntly: “It’s not the 1900s anymore. No one cares.”

A movie that truly portrays two men having a relationship as not a big deal, John Apple Jack, is one of the select few made-for-gay movies I will enjoy watching over again and enjoy sharing with my friends. This movie surprises you with hidden, lovely, awkward and painfully adorable moments. If your heart doesn’t melt when Jack’s “son” asks him, “Well, why can’t you just marry John?” you might want to rewind to where John treks stark naked in a towel to retrieve something very important to Jack’s career. John’s bashful chivalry, and Jack’s complicated devotion, makes their acceptance of each other’s feelings, in the end, a wholly satisfying experience.

John Apple Jack has just enough uncomfortable profiles and risky shots to make you excited and laugh, and the plot isn’t overly complicated that it takes you away from the acting and cinematography. For gay cinema, I think it’s very difficult to accomplish sexy and remain romantic, but John Apple Jack’s ending better bring you to tears. Oh, and have your playback feature ready for the sex scene: flawless.

John Apple Jack is currently on the tour circuit, with planned stops Kansas City, Mo., Beijing and San Francisco before the year’s end. To find out more information about the film, visit its official website, and check out the trailer below.

Photo: Provided by John Apple Jackwriter and producer Rick Tae, who also provided the screener link to the film.