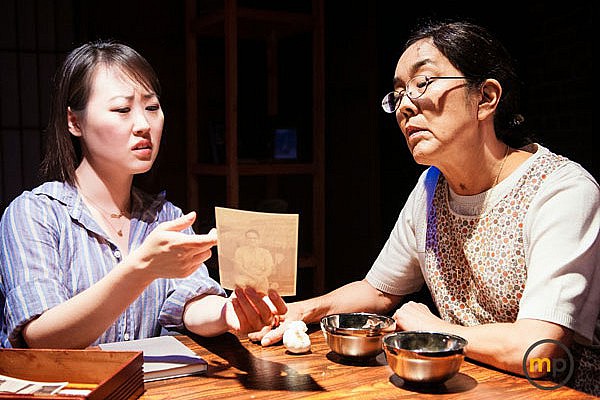 Artists at Play, a Los Angeles theatre collective founded in 2011, secured the rights to perform one of Julia Cho’s most acclaimed works, 99 Histories. Although more than ten years have passed since Cho wrote the play, 99 Histories delivers an impactful and emotional message that is especially relevant to the changing demographic landscape of Los Angeles. While the play addresses universal themes, 99 Histories focuses on the relationship between a Korean-American mother and daughter and the role family history plays in shaping identity.

Artists at Play emerged to fill a void in the Los Angeles theatre scenes. “We wanted to produce theatre we weren’t seeing,” says Marie-Reine Velez, a founding member of the theatre group and Associate-Producer of 99 Histories. To be exact, the “theatre they weren’t seeing” was performances that told the narratives of Asian Americans and related the experiences of first- and second-generation Americans. Velez adds that there is often a generation gap between Asian immigrants and their children–Artists at Play seeks to bridge this cultural divide and bring these stories to wider audiences.

“American theatre still lacks diversity,” explains Julia Cho, founding member, producer and lead actor in 99 Histories. Cho speculates that 99 Histories is often passed over because of its ethno-specific casting. “Artists at Play is passionate about the work that we do; presenting on the stage stories and roles by and for Asian Americans, too often dismissed in the local and national landscape,” Cho says. “I’m proud to say that all of the shows we’ve presented so far–all Los Angeles premieres–have featured Asian American characters who are complex, nuanced individuals that we do not yet get to see enough of in other mediums.”

99 Histories calls for a dominantly Korean-American cast and addresses issues relevant to the Asian American community. It also reinforces the role culture plays in shaping family relationships and includes subtle digs at common stereotypes, such as the idea that all Asians look alike. While the play is not exclusively created for a non-white audience, Artists at Play find most of their seats filled by people of color.

Yet, it would be a mistake to limit 99 Histories to certain audiences. Even though the themes the play addresses may resonate more strongly with Asian Americans, 99 Histories provokes an emotional response and resonates with people of all backgrounds. “People can connect to it on many different levels. It’s not just a specific culture, there are many universal themes,” Velez says. The play deals with changing dynamics between parent and child–from a child-adult to an adult-adult relationship–and stresses the importance of open communication between generations.

Cho’s work seamlessly weaves between dreams, memories and the present to envelope viewers in Eunice’s mind. Eunice, played by Julia Cho, returns to her mother’s home and together they delve into the past, unearthing painful memories but ultimately strengthening their precarious relationship. Eunice’s mother, Sah-Jin (Sharon Omi), proves to have as many secrets to hide as her pregnant daughter. Sah-Jin recalls and reimagines her past with the help of photographs and additional characters. The precise and poignant dialog, and the cast’s emotional, yet realistic, performances, prevent this family drama from turning into a soap opera. 99 Histories explores the love-hate relationship between Sah-Jin and Eunice, “a beautiful relationship, the push-pull of two people coming together to start the process of healing,” explains Cho.

In addition to touching on themes of parent-child relations, 99 Histories addresses the issue of mental illness. Director Leslie Ishii says this aspect of the play struck her immediately, “in the Asian American community, as in many communities of color, mental illness often goes undiagnosed.” Eunice’s unspecified mental illness is a recurring motif in her life–it complicates relationships and compels her to explore her family’s past.

99 Histories uses the concept of chung, a love-like bond born from time, to highlight the role memory plays in relationships. Unlike passion, this form of affection is more enduring and seems closer to kinship. Chung describes the bond and responsibility family members feel for each other and colors how individuals perceive the world. It encompasses feelings of selflessness, obligation and tenderness; unlike passion, it endures and is not connected to lust. Sah-Jin explains this slippery concept, “There is memory in chung. There is time…Memory plus time.”

Artists at Play uses subtle transitions between scenes, such as fading lights or freezes to indicate temporal or location changes. This helps situate the audience in Eunice’s mind–a place where reality as most people think of it–is not always a stable thing. Cho remarks that, in the play, “realities are overlapping.” This tension between the real and the imagined makes the audience question the strength and reliability of their own memories. Eunice also references literary works, such as D.H. Lawrence’s short story “The Rocking Horse Winner” and Tennessee Williams’ The Glass Menagerie, adding another layer to the play. Acoustically, Bach’s Prelude “First Cello Suite in G” interlaces the entire performance; subtle variations in the music give the audience clues about Eunice’s mental state.

Recollections and the way individuals perceive the world helps shape their identities. While it is tempting to view mental illness as a deficiency, Ishii adds that mental illnesses have not always been stigmatized by society. Through the character of the Young Woman, Ishii “explored the idea of schizophrenia not always being a bad thing” by portraying her as a shaman, rather than a deranged woman. The Young Woman’s movements were based off Korean shamanic dances and ritual movements. Actors also researched post-traumatic stress disorder, paranoia, depression and schizophrenia. In addition, the cast consulted a mental health professional to ensure a fair and respectful portrayal of mental illness. Artists at Play sought to create a dialog on the topic of mental health, not to tarnish or victimize individuals.

Even though audiences may not be able to personally connect with the play on the topic of mental illness, 99 Histories also poses a broader question about the meaning of home. For many, home is a physical location, but Cho’s work suggests it is more than a place in space. Home is also a place in time: It is an intangible feeling and connection to history. While the play does not directly ask these questions, the relationships presented suggest Eunice seeks to find her “home” by searching for answers about her past and examining how her experiences shape her identity.

The questions the play raises have no easy answers. 99 Histories has an open-ended conclusion, which allows viewers to infer the trajectories of the characters. This emotional journey is bound to spark conversation and introspection–hopefully encouraging audiences to explore their own family histories. As Cho says, “It’s amazing that words on a page bring something like this to life.”

99 Histories runs through October 5, 2014. For details, visit Artists at Play.