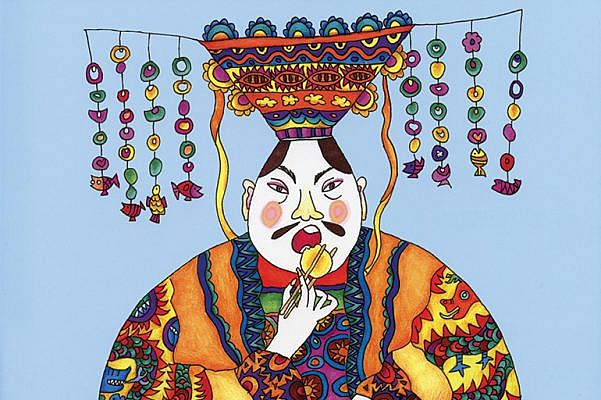 Chinese folklore is steeped in mystical adventures culminating in universal lessons of empathy, generosity and forgiveness. Chinese Fairy Tale Feasts: A Literary Cookbook from Interlink Publishing Group combines a brief collection of these stories with a Chinese food recipe of equal cultural relevance. The result is a charming and fast-paced book that takes young readers on a cultural journey of delicious proportions.

Written by award-winning author Paul Yee, with illustrations from Shaoli Wang and recipes from Judi Chan, Chinese Fairy Tale Feasts is one in a series of such books that look to bridge cultural stories with colorful pictures and comforting recipes. Created by Jane Yolen and her daughter, the series tells important stories where "food is an all-powerful motivator," according to her forward in the book.

In "Magic Rice on the Mountain," a girl, separated from her kidnapped mother, goes to live with her oppressive uncle. When he tries to starve her on a mountain by telling her she can turn stones into cooked rice by rubbing her feet on the bowl the stones rest in, he’s mortified to find she actually can. When a passing monk witnesses her magic and returns her to their village as a hero, she’s reunited with her mom, and the two lead a happy life. The uncle, seeking vengeance, goes to eat a bowl of her rice, only to have it return to stones in his stomach. The recipe to accompany this tale? Fried rice.

In "The Hall of Contented Cravings," Yee tells the story of a king who loves to eat delicious food. When he asks the chef to come work in his palace, the chef declines. As a concession, the king says the chef can stay in his shop if he can make the king three extraordinary dishes. "‘I command you now to cook a seafood dish. The seafood must be swimming, but it cannot touch any liquid,’" the king says, as the chef’s final test. The resulting dish, and recipe, is a wonton floating in soup, its envelope keeping the contents away from the liquid.

Each of the thirteen tales demonstrates how folktales shape a culture’s identity and values, just as each of the accompanying recipes outlines a unique cuisine appreciated by those people. A wonderfully illustrated book that can be shared before bedtime, or before a snack, Chinese Fairy Tale Feasts is a great way to introduce young people to a new culture and new flavors alike.