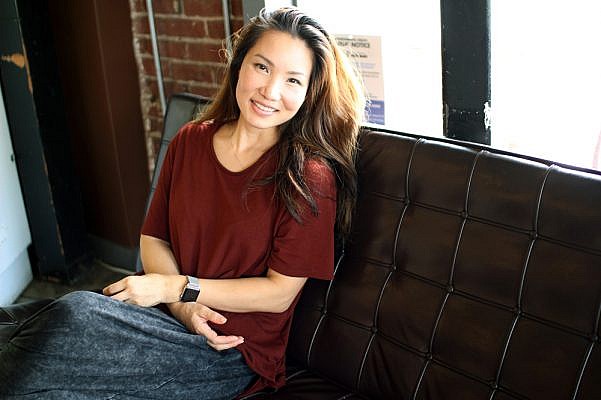 There is more to Ahyoung Kim than meets the eye. Despite her poise, Kim has a spunky sense of self-determination. Originally from Federal Way, Wash., Kim moved to Los Angeles with only $1,000 to her name to follow her dream of becoming a fashion designer. She weighs in on the Asian American community and the importance of creativity over coffee at Swork in the trendy Eagle Rock neighborhood of Los Angeles.

Kim came to the United States from Korea when she was 9 years old. “It was a big adjustment,” Kim tells Dumpling. “I didn’t speak English. I grew up watching Westerns — I thought it would be like that,” she says. After discovering Washington State lacked horse-drawn buggies and covered wagons, Kim realized the United States was not as different from Korea as she first assumed.

As a child, Kim always sketched, drawing much of her fashion inspiration from her mother. Kim’s parents attended Seoul National University, her mother studied Italian opera singing and her father classical conducting. She grew up watching her father perform in the Korean TV show One, Two, Three — an educational program for children learning English. Kim’s mother was her fashion inspiration. “My mother got custom-made clothes from a boutique,” Kim explains, “she always wore something different. From an early age, I was just drawn to that.”

Despite their creative professions, Kim felt pressured to become a lawyer, rather than a fashion designer. “I think there’s a lot of emphasis on social status in the Asian American community,” she says. “People tend to define each other by what they do, but that’s not necessarily an accurate description of who they are.” While most people are familiar with the oft-joked about Asian doctor/lawyer/scientist, this stereotype seems to stem from some semblance of truth.

“I think it’s just because most immigrant parents want something better for their children. They wanted me to do something stable,” Kim says. As a result, she almost attended the University of Washington to study law but changed her plans and attended FIDM, the Fashion Institute of Design & Merchandising, in Los Angeles, instead. Despite her nonchalance, the decision to attend FIDM was certainly not an easy one. She did not want to settle and risk being unhappy with her profession for the rest of her life.

“My parents told me that if I go to FIDM, I would have to do it on my own and not regret it,” Kim says, accepting their challenge. Kim describes FIDM as a rude awakening, “I knew I was there and I had to make it. I didn’t really identify with the other students who felt like everyday was a fashion show.” With only $1,000 to her own, Kim took on extra jobs and economized by riding the bus to and from school and work. “I had to make it, I didn’t have a choice,” Kim says. “I felt like I had to be the ‘tough girl,’ like I had something to prove to the world.”

After a detour in the product development industry, Kim decided to open her own company. “Even if I failed, then at least I tried to start my own company,” she contends. “A smart person takes advantage of the opportunities given to them.” When Kim’s friend, photographer Joy Marie Smallwood, complained about a lack of “cool” clothes for her three sons, the pair decided to start Joah Love in 2008. Smallwood eventually left the company in 2011.

Although Kim’s background was in women’s contemporary fashion, she was eager to try children’s clothing. “Sometimes you just have to be excited about the creative process and let the details work themselves out,” she says. Joah Love launched its first children’s clothing line in spring 2009.

Kim says her friends were essential, especially in the early days of the company. She describes inviting friends over to help fold clothes, pack boxes, ship orders and celebrate by ordering pizza. “You just have to keep focused and enjoy the hard times,” Kim says. “Those are the memories you can’t exchange for anything.”

Looking back, with a successful childrenswear line under her belt, Kim feels she has more perspective, “Sometimes as a kid, you think your parents have all these expectations but they just want the best for you.” Kim recalls asking her mother, “‘Do you still wish I’d been a lawyer?’ She said, ‘No, I just want you to be successful and secure in your life.’ With creative professions, it’s kind of uncertain.”

Kim feels that friends and family are an invaluable support system and wishes other young people would not be afraid to rely on them more often. “You don’t have to feel like you have something to prove to the world all the time, it’s OK to have them provide support. …,” she explains. “Family and friends are the most important thing you keep, it’s the memories you make with them – not the job or the money that stays.”

This Korean-America fashion designer has worn many hats and continues to explore her creativity – she does not let labels define her but rather seeks new opportunities and capitalizes on them. “It’s OK to try something new, it’s OK to change – it may lead you to another opportunity and you’re a fool if you don’t take it.”

Kim seems to have found her happiness and, although she says the California weather doesn’t suit her, the sunshine seems to agree with her just fine.