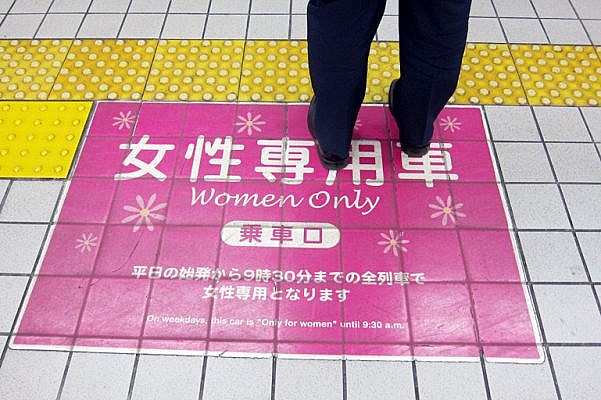 It started out with an innocent trip to the convenience store, a near daily ritual for Tokyo visitors and residents alike. Among the rows of snacks, drinks and prepackaged goodies sat a small box of Pocky Men’s. This box of chocolate-covered cookie sticks immediately caught my attention. Aside from a craving for chocolate, it made me wonder why its manufacturer, Glico, felt the need to specify this particular Pocky was for men. Thinking it might be a funny, sub-par translation, I bought the box as a souvenir.

In the interest of unbiased reporting, I decided to sample a box of men’s Pocky and a box of gender-neutral Pocky. I wasn’t sure what I expected – that the men’s version would have a different flavor or come in a more masculine shape? They looked and tasted the same.

This novel packaging inspired me to pay more attention to the gender norms in Japanese society during a recent trip to Tokyo. From the outside, many people equate Asian societies with androgynous men and geisha-like women. Of course, the reality of any city is more complicated than that, but the gender roles in Japan, specifically Tokyo, struck me more than those in either New York or Los Angeles, metropolises I’ve spent time living in. According to the World Economic Forum’s gender gap ranking, Japan placed 101 out of 145 countries in 2015, or 67 percent gender equality, compared with the United States at 28th place with 74 percent – a surprisingly poor ranking considering Japan’s advanced economy.

Are these gender ideas a holdover from traditional roles? After all, Japan has a rich cultural history – where else can you find a thousand-year-old shrine in the middle of a metropolitan area or a woman in a kimono and traditional wooden shoes reading the news on her iPhone as an everyday occurrence?

Perhaps the most striking example of the gender divide in Japan are the women-only train cars and buses. Although Japan is not the only city to implement single-sex public transportation, it came as a shock to me that the country felt it necessary to take this step.

As a frequent rider of public transportation in New York and L.A., I’m no stranger to the verbal harassment many women face on buses and trains, but it never occurred to me that removing myself from the situation in a women-only car would be the solution. These single-sex pink cars are most common during rush hour and on overnight buses.

According to Nation Master, a country comparison tool, Japan had 10.11 rapes per million people in 2005, while the United States had 27 times more, or 274.04 per million. Of course, these statistics don’t take into account the fact that many women may not report rape for fear of shame. But the indisputably large difference in sex crimes is enough to give pause. The most common complaint on public transportation in Japan is groping – with trains as crowded as they are, this comes as no surprise – but are these single-sex train car options the solution?

During my stay in Japan, I took a remarkable amount of public transportation: an overnight women-only bus, trains (both mixed and women-only cars), highway buses, planes and shinkansen, or bullet trains. Just as with the Pocky, I wasn’t sure what to expect. Would traveling only in the company of women make me feel safer? Would these single-sex cars soon be requested in L.A.?

In my opinion, Japan is a culture of convenience. Even with my limited grasp of the language, I found it easy to navigate and fulfill my basic needs for vegetarian food, tea, and clean restrooms. In addition to the aforementioned convenience stores on every corner, there are vending machines lining most streets, copious free Wi-Fi spots, and startlingly-clean public restrooms. So offering a somewhat less convenient means of transportation seemed strange.

After what feels like a lifetime of public transportation in American metro systems, I thought nothing of hopping on a Tokyo subway as an unaccompanied woman, but my host had other ideas. She insisted that I seek out the women-only cars and discouraged me from saving about $30 by booking a mixed gender bus. Uncertain of how pervasive the public groping problem was, and eager for a new experience, I booked my ticket on the ladies bus, ready to experience a new sense of camaraderie.

In order to get to the women-only bus, I had to take two subways. Riding the mixed subway car versus the women’s compartment didn’t leave a distinct impression on me – both were unbearably packed with people. Since I never experienced any harassment in Tokyo, I didn’t feel the need to wait for the specific pink car during my stay. In fact, my time in Tokyo was refreshingly free of catcalls, which could have been a product of many things, including my status as a foreigner and my limited grasp of the language. Even so, it was nice to receive no unwanted attention – sexual or otherwise.

The women-only bus was a comfortable, if somewhat unnecessarily feminine, experience. Given the number of buses I’ve taken, I think it carries some weight when I say this was undeniably the best bus I’ve ever riden. The seats were separated by generous aisles and the ones closest to the windows had privacy curtains. They also featured headrests, footrests, and in-seat chargers, plus accessories like pillows, blankets, slippers, toothbrushes, and pink tissues. The on-board bathroom even had pink toilet paper. Everything was quiet and orderly. Most of the women slept or sat silently in their seats, and I was uncertain whether the extra money I paid for the ticket went towards the comfortable accommodations or the creation of this man-free zone.

One woman I spoke with exclusively takes single-gender buses and train cars, but coming from L.A., this seemed to be an unnecessary luxury. This made me wonder whether women who did not take the single-sex trains were subject to more harassment than before the separated trains. This divide could inadvertently be increasing harassment for women traveling in mixed cars, whether alone or with companions. It could perpetuate a victim-blaming mindset that women who don’t use the ladies’ cars are “asking for it” or in some way permitting harassment the same way rape victims are blamed for wearing promiscuous outfits or having drank a few beers before they were assaulted, as if this justified the assault in the first place.

Although I didn’t take a mixed-gender overnight bus, I had plenty of experience on the trains and shinkansen among both men and women. Despite the confines of rush hour trains, I never felt unsafe. Perhaps, my experiences in less-than-polite company in L.A. jaded me, but I saw no reason to shell out the extra cash for a women-only bus.

My most distinct impression of the bullet train wasn’t that I sat between two men, but that they allow drinking on the train and an employee walks by with a cart of snacks for sale. These women-only cars seem to be unique to Tokyo, but Japan isn’t the only country that has implemented them.

In 2014, YouGov found that in 16 major cities, nearly 70 percent of women said they would feel safer in single-sex areas on buses and trains. Tokyo came in 4th place in the frequency of groping, while New York was a distant 14th. But New York scored much higher on verbal harassment (9th place versus 16th). With these numbers in mind, it makes sense that women in New York are only 35 percent in favor of single-sex transportation.

Street harassment, or train harassment, can’t be solved with a single-step approach, and it doesn’t seem that creating a temporary man-free zone is the answer. While these train cars and buses may provide some relief, harassment can still happen on the train platforms, at bus stations, and on streets. There’s no roadmap for ending sexism and ensuring that women and men feel comfortable in public, but it’s clear that a cultural shift needs to take place where we shame the perpetrators and not the victim.

While no one should resign herself to harassment being one of those unpleasant hazards that comes with living in a big city, I don’t think the solution is as simple as barring men from certain areas. Just like Pocky Men’s, single-sex public transportation seems like a novel way of marketing something old. There is certainly a shadow of truth behind it – men like chocolate just as much as women, and sexual harassment is an undeniable problem – but there is no one-way ticket to a sexism-free society.