Modernity is often associated with technology and updated fashions. But it can also be described as the way current peoples think and interact with their fellow man. Maulik Pancholy’s The Best At It exemplifies the coming of age spirit of modern life and love. In a time of worldwide tumult, when nations appear to be embracing more insular ideals, The Best At It looks to celebrate the differences that make all of us great.

For Rahul, this means a version of America in an Indiana town surrounded by a surprising array of cultures and generation-spanning mindsets. Rahul and his best friend Chelsea, a perky, woke heroin in her own right, are about to start their first year of middle school. Having spent the summer together, we see the two bonding over their shared geekiness and love for Bollywood films passed down by Rahul’s grandfather, Bhai. But entering middle school this year feels different, even if it might be in the same building, because Rahul has a secret that’s only just beginning to awaken, and one he most definitely can’t talk about.

The modern Indian American family on the block, the Kapoors are well integrated into their neighborhood, with the father singing in a Bollywood cover band and the mother running a company and coordinating a cultural bazaar meant to showcase the diversity of their town. There’s also Justin, one of Rahul’s close childhood friends whom he grew apart from as the years went on and Rahul continued to question his sexuality. It’s here that the book illustrates the curious nature of coming out and whom to confide in.

One night, while watching their favorite Bollywood scenes, Bhai recounts the story of Rahul’s grandmother. She took it upon herself to get an education and be the best at everything she set out to do. We get a history lesson in the sexism of India past, and see how that initial act of courage from his grandmother potentially paved the way for other women, like Rahul’s mother. It’s here that Rahul decides he needs to be the best at something, too, and sets out to uncover what that might be.

While Justin is good at football – and being an all around hunk – Rahul tries to shun away from the thing he might be naturally inclined toward, math, so as not to be a stereotype. We get a lot of this conflict in the story, from Rahul loving his Indian culture, but also striving for the ideal image of a white middle-American family. During one moment of Rahul’s quest to be the best at acting, we see him go to an audition where he’s told he doesn’t fit the type of boy they’re looking to cast, i.e., he isn’t white enough. It’s here the conflict brings itself into full light and starts to drive a wedge between him and his outside relationships.

Rahul’s aunties and uncles often come to the house to share in food and laughs. But we see one of the uncles starting to disparage the possibility of Rahul being gay. While not explicit, the subtle hints do their job of burrowing their way into Rahul’s mind, eventually manifesting as an anxiety-induced obsessive compulsive disorder. Is the door really locked? Is the stove really turned off? Each one checked a minimum of five times, for safety. As the secret continues to eat away at Rahul over the course of the book, we see his mental clarity decline along the way. This culminates into a heartfelt scene with Rahul and his father discussing the possibility of him seeing a psychiatrist and opening up about his inner turmoil.

We see this dichotomy throughout Pancholy’s book. Rahul has to grapple with his otherness in terms of being neither fully Indian nor fully seen as American. We also see this as Rahul struggles with coming to terms with his sexuality. Pancholy (best known for roles in 30 Rock and as the lead voice talent in Nickelodeon’s Sanjay and Craig) does an exemplary job of crafting characters that are all at once unique and familiar. While I can’t know what an Indian American family goes through, per se, I can see myself reflected in Rahul’s struggle to fit in and discover who he will become. This book, presented as a middle grade read, would have been marvelous to have growing up. It mirrors modernity and how to live more authentically in a beautiful way that incorporates touching prose and narration with a gripping story that is quick to read but long to forget. 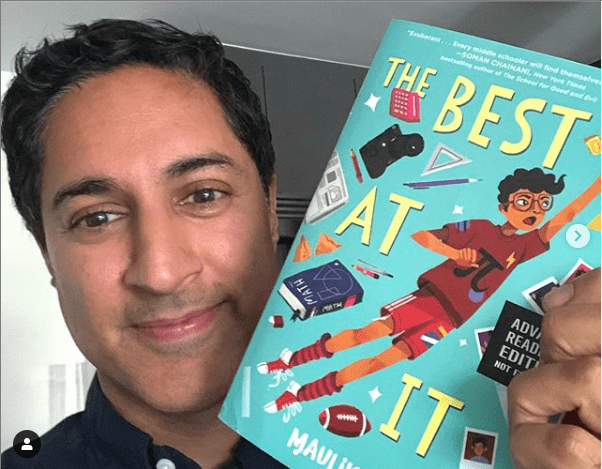 “I wanted to give voice to that kid out there who is just like I was,” Pancholy writes in the introduction to his book given to reviewers, “grappling with complex issues using his brain, his guts, a trusty best friend by his side, and an eternal sense of optimism. Who also happens to be Indian American and discovering that he’s gay.”

Modernity in this age is accepting people for who they are and celebrating their differences, whether they be cultural, sexual, or otherwise. Pancholy’s debut novel is a gloriously fun, engaginging, and uplifting addition to the growing body of work meant to unite, rather than divide, us. “Wait, Ra. Why wouldn’t you want to be you?” Chelsea asks at one point in the novel, which is echoed by Rahul’s father later on. “And no matter who you are. Your mom and I will always love you.” And it takes the entirety of the book, but Rahul finally relents, “Being different is what makes us fun, remember?” With The Best At It, it’s hard to forget.