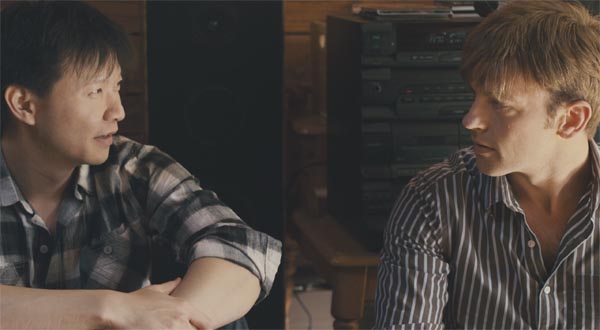 When he speaks, it’s with a Southern drawl, instantly and hypnotically approachable. His son likes soccer and dragons. And when his husband dies, we see that a Chinese-American from Texas living in Tennessee has little rights to keep his tattered life together.

Patrick Wang wrote, directed and starred in In the Family, which is just now gaining festival distribution after appearing at the San Diego Asian Film Festival in October 2011. It tells the story of Joey as he copes with the death of his partner, Cody (Trevor St. John, Serving in Silence, One Life to Live), and the ensuing custody battle over their 6-year-old son from Cody’s first marriage, Chip (Sebastian Brodziak).

Following Cody’s death, his outdated will leaves Chip in the custody of Cody’s sister, Eileen (Kelly McAndrew, Cat on a Hot Tin Roof, Everybody’s Fine). Flashbacks tell a story of a seemingly united family front filled with turkey and first kisses. The present, post-Cody world is a different story, with people whom Joey once depended on turning their backs to him. Eileen wants to keep custody of Chip without fully understanding Joey’s wishes and how much those aligned with Cody’s.

Wang immediately surprises us with three things at the beginning of the film: Joey is a non-white father to Chip, Joey speaks with an unexpected accent and Joey is gay. But that’s basically all we know of him. Oftentimes, we enter scenes from over Joey’s shoulder, giving us an almost first-person experience through his eyes, without knowing what he might be thinking. The camera stays fixed on its subjects in the most natural locations, showcasing the world as experienced from the protagonist’s prospective, even if this means cutting characters out of sight at times.

In the Family embraces the audience, as we take too long a stare at its events. Some scenes last five minutes or more without cuts, transfixing us in time and place. It makes the characters mercifully human in their mundanity without feeling tedious. And at nearly three hours, its a wonder we never squirm in our seats with urge to leave.

What In the Family culminates to is a nearly 30-minute deposition where we finally learn about Joey, his past, his dreams and the relationship he shared with Cody and Chip. “We never talked about the big stuff,” Joey says during the final moments of the film, in regards to Cody’s will. “… never told each other how happy” we were. We come to understand the dangers a lack of communication creates and the universality of family, all at once.

“Travel is fatal to prejudice, bigotry and narrow-mindedness,” Mark Twain wrote, which seems to apply to Joey’s circumstance. The world is filled with differences beyond the bubbles we live in and the filters we apply to situations. In the Family touches on the issues of race, sexuality and politics facing this country today in an honest and earnest manner rarely encountered in mainstream cinema but wholeheartedly felt when applied.

comments powered by Disqus
« Harvard, Princeton Accused of Discrimination Letter From the Editor »