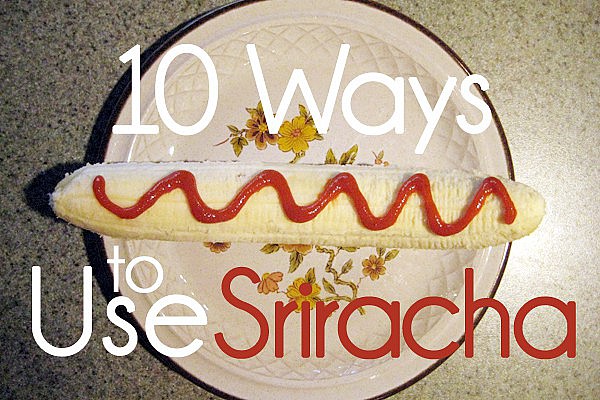 Sriracha is a great condiment that can be added to anything. And we mean everything. Here’s our list of 10 Ways to Use Sriracha.

Sriracha can be added to homemade salad dressing and even store-bought dressings, dips and other scoopable or pourable flavor-adders. Try this recipe for Sriracha Buttermilk Dressing.

Peanut butter on toast with dots of Sriracha is baller (that’s a word). Like eating your favorite Thai peanut sauce on a slice of bread that’s perfect for breakfast or a snack between meals. Jelly is optional.

If you put it on your bread, why not inside? Randy Clemens’ cookbook, The Sriracha Cookbook: 50 “Rooster Sauce” Recipes That Pack a Punch, features this recipe for Cheddar Sriracha Swirl Bread. Imagine the sandwiches this could create.

Feeling daring? Trying a game of Sriracha Roulette. Like it’s Russian counterpart, you need a weapon (six cupcakes perhaps?) and a magic bullet (said cupcake with a layer of Sriracha hiding under the frosting). For the cupcake example, frost one cupcake with a Sriracha mixture, while leaving the others plain. Shuffle the cupcakes so you can’t tell which has the explosive sauce, and then have your friends each choose a cupcake. The excitement just might kill you (but we hope not!).

Some studies suggest using capsicum, a fiery fruit like jalepeños, topically to treat certain types of skin cancer and internally to cure ulcers. We’re no doctors, so can’t recommend applying Sriracha to the skin, but anything with the Rooster is fine by us.

Lick your fingers with this recipe for Apricot-glazed Sriracha Chicken. A mouthwatering combination of two of our favorite food groups: meat and Sriracha.

You heard us right. The sauce can liven up a bit of vanilla bean ice cream, although it might cause faster melting. Its combination of cool heat and sweet fire will have you rolling with pleasure.

More of a chocolate person? Try the chili sauce in chocolate concoctions such as hot cocoa and mochas. Chocolatier Lindt also has a chili chocolate bar that, while it doesn’t include Sriracha, is a perfect example of how the sauce might liven up your own candy creations.

9. In Chili (with Chocolate)

According to Huy Fong Foods Inc.’s (Sriracha’s parent company) operations manager Donna Lam, one caller said he “put it in [his] beer and also on top of popcorn.” We’ve never tried Sriracha in beer, so can’t recommend a particular brew, but what doesn’t kill you makes you stronger, right? Can you think of a name for this masterpiece of flavor chemistry?

Thought of more while reading our list? Give us your own in the comments below.