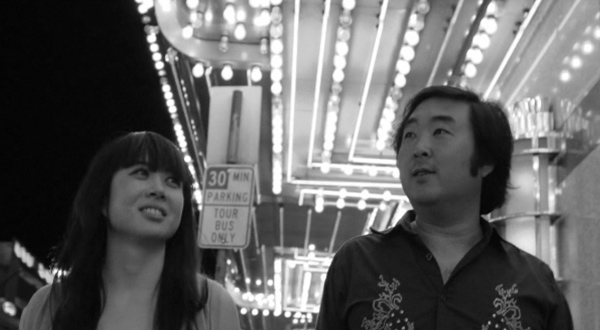 Director Dave Boyle‘s Surrogate Valentine received accolades for its honest portrayal of people and circumstances. Shot as a black and white almost-documentary that could substitute for reality television in its character intimacy, Surrogate Valentine follows Goh Nakamura (as himself), San Francisco indie musician, from his chipped-glass beginnings to looming West Coast indie scene stardom. As the film ends, we’re left to wonder what happens between Goh and since-high school crush, Rachel (Lynn Chen), and Daylight Savings continues Goh’s adventure from there.

Filmed in 15 days and, according to Boyle, costing “about as much as a Honda Element,” Daylight Savings feels familiarly different from the first film. Certain aspects of the documentary style shaky camera are replaced with crisper images that look like a widescreen Hollywood release. The black and white atmosphere from the first film is left in tact, as are the plays on the audiences inability to see colors character can. Boyle says he’s been waiting to direct larger-budget films, but those talks often fizzle. “But rather than let that kind of get me down,” he says, “I’d rather keep polishing my skills on movies like this.”

Daylight Savings follows Goh through a rough break up with “The Professor” (Ayako Fujitani) and onto the trail of DreamDate singer Yea-ming Chen (as herself). What results is a comedic and poignant road trip from San Francisco to Las Vegas to Los Angeles with Goh and cousin Mike (Michael Aki) that sees Goh’s rising career and love life splinter. Surrogate Valentine 2, as some might call it, is a fulfilling followup to a film that is instantly immersive and universally translatable. There’s sex, Asians and a bit of softly cooed rock and roll that blends seamlessly into Goh’s pursuit of happiness.

Dumpling attended the first showing at the Cleveland International Film Festival March 31 where both Boyle and Nakamura were in attendance. “This time, it was kind of an experiment to push Goh,” Boyle says of Daylight Savings, “because the role that he plays in this movie would be difficult for a trained actor, and I wanted to kind of challenge him more. And I think he did a good job.” We sat (stood outside the auditorium, really) with Nakamura to discuss his portrayal of Goh in the films, the state of his music and his future projects.

(If you’d rather listen to the interview, you can download our Dumpling Cast Asian-American podcast. Links to future Boyle and Nakamura projects and a chance to win Daylight Savings on DVD can be found below.)

DUMPLING: How much of yourself made it into the first Goh as opposed to the second?

GOH NAKAMURA: So the first one, I’d never acted before. So Dave was just kind of careful not to try to overload me with too many things. So I just kind of was myself more. But this one, there’s more of a plot, kind of like a story. There’s also a lot of stuff in there that I normally would not say or do, so it’s more of an acting experience. So to answer your question, maybe the first one is like probably 80 percent me and then this one is probably like 30 to 40 percent me. There were also four writers on the second one, so there were a lot more things coming from different directions.

Do you have a cousin Mike’s ringtone on your phone right now?

I do. I never use it – it’s just too annoying. It’s just something that… I met him in Chicago a couple year’s ago, and he would always do it, and it was just hilarious. And then he texted it to me one day, and I thought it’d be funny as a ringtone.

And that’s how it ended up in the first film, too?

Yeah. It’s actually on iTunes on your iPhone app, if you look for it in the store.

It’s sort of weird, but when I saw the first film – I was watching it last night – and I saw sort of some of myself in the character. And how do you think Goh is kind of universal and sort of that presence about him is universalized?

Do you think it helps you create better music, that heartbreak?

I think so. Yeah. I wish it weren’t that way. I wish I could just, you know, kind of move on and write songs about other things, which I will. Which I will, but…

What kind of roadblocks have you encountered as an Asian-American musician, or just a musician?

Just being a musician. But I do have friends who were in bands where they would be playing showcases, and then some producer guy would be like, “Oh, man. You’re not the right look,” or something, for this band, or whatever. And that always pissed me off. So I never kind of stood for that. So I was just like, you know, screw it. I’m just going to do my own thing. So luckily, I’ve never had to deal with that directly, but just hearing horror stories from other musicians, you know. But overall, it’s pretty colorblind, you know.

Describe what it’s like to have your Kickstarter funded one-and-a-half times over what you were looking for.

It’s unbelievable, man. It’s totally… I was really scared, actually. I was like, I don’t know if this is the right thing to do. But I did release an album before and made it a free download. So I thought, OK, cool. If you really like that album, maybe you’ll help support my further – my newer works. I also put myself in the shoes of a fan because I actually support a lot of Kickstarters, too. So I can understand that feeling of wanting to be part of something and make it happen.

Can you name any of those Kickstarters?

Yeah. My friend – her name’s Odessa Chen – she put out an album. Another friend named Shenandoah Davis. There’s another movie – it’s actually Lynn Chen‘s husband, Lynn who played the love interest in the first one. It’s called The Man’s Guide to Love, and they’re trying to make this feature.

A fan interrupts us for a DVD and CD. Nakamura obliges, as the fan, an elderly white woman, asks him to sign the DVD and asks about Goh getting together with Rachel in the next film.

I know how the third one’s going to end. It’s actually a nice… Yeah.

The fan says she’d rather wait than have him spoil how he envisioned a potential third film from ending, as we return to the interview.

Do you see yourself trying to do more acting in the future, or sort of sticking with music for now?

No, I would love to try to act. But as far as going to auditions, I don’t know if I could stomach that. I just know so many L.A. actors who – it just messes with their head. I think it drives them nuts, you know? Especially for Asian roles. I don’t want to play a delivery guy or some version of Long Duk Dong or something, you know?

It’s a classic, but it’s still kind of a painful thing to watch. But if Dave wants to do something with me, I’d be totally fine. But I’m always going to do the music thing.

In an interview at SXSW, Dave Boyle sort of said that he met you at a party and was sort of captivated by the way you moved and everything, and how did that sort of translate into the character Danny in the first film? Was that sort of how Danny met you and was involved with the Goh of that movie?

Oh, it wasn’t that bad. The Danny character is sort of an exaggerated version of one of those L.A. guys that I’m kind of talking about. But I just met him very casually at a film festival like this. And, you know, he doesn’t really drink because he’s a Mormon. So I got a beer, and he’s eating chocolate cake. And I’m like, “That’s your dinner?” And he’s like, “Yeah.” And, you know, we just hit it off. So that’s what I love about a film festival is just you meet like-minded creative people and, you know. He’s just like a machine, you know. He’s putting out movies every year. I always say he’s one of those guys who, he’ll tell you about a project, and then a year later, he hands it to you. You know, it’s like, “How’d you do that?” I think it’s because he doesn’t drink. He doesn’t party.

Has a little free time?

What can we expect from you, aside from what’s going on with the Kickstarter?

Oh, I’ll just tell you what my next project is. It’s a musical travel show. I’m going to make a Kickstarter for it. It’s sort of like a No Reservations, that Anthony Bourdain show, but instead of food, it’s going to be going to different studios and then inviting different local musicians and interviewing them and then just having a recording session. I guess my pitch is that, everybody – you know, different chefs have different recipes [about] how to make a soup, or something. Every musician has a different way that they make an album, so I just want to explore that.

Will you post that on YouTube or are you trying to get some kind of cable channel or something?

Yeah, it’ll be a little Web show, I think.

Oh, that’s awesome. And when can we expect that?

If it gets funded, hopefully, it’ll be done by July. Episode one.

You can listen to the audio version of our interview here. As part of the screening, Boyle gave us a copy of Daylight Savings to give away to Dumpling readers. You can see more details about that contest on our giveaway page. To help support Daylight Savings and possible fund a third film, see Boyle’s Kickstarter page.