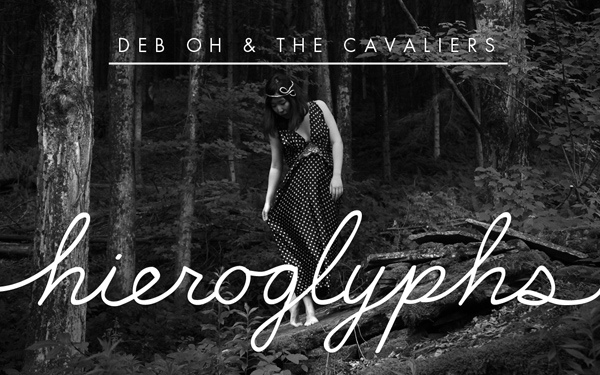 Deb Oh packs a lyrical punch that competes along the lines of Regina Spektor and Sarah Jaffe admirably. It’s a shame, then, that you might never have heard of her. With a solo EP released last year entitled Cold Glory, Oh joins her band, the Cavaliers, in prepping the release of their first joint EP. In order to make the experience a bit more intimate, the group turned to PledgeMusic, an online crowd-sourced funding community that donates a certain percentage of excess proceeds to charity.

Their upcoming EP, Hieroglyphs, is set to come out later this year. And in between the chaos of a day job and booking gigs for the band at night, Deb Oh found the time to respond to our questions via email. An Alaskan transplant who used to be Sarah Palin’s neighbor, Oh now lives in Brooklyn, N.Y., and would like nothing more than to connect with you through her music.

DUMPLING: When did you start making music? What was the driving factor that motivated you to start producing albums?
DEB OH: I started writing my own music when I was 18, but I’ve been playing the piano since I was 3 years old (classically trained by some pretty fierce Japanese and Russian teachers), and started singing in a children’s choir at age 5. I began looking at music as a career after graduating from college, when I saw a very clear fork in the road between what I had studied in school and where my true passion was. It was a terrifying leap of faith, but I knew the regret of not pursuing music would stay with me. So here I am.

You told Broke-Ass Band you were a research assistant in 2010 to a historian. Is that what you studied in college? How does this relate to your music?
I studied Political Science and French at NYU, but have always been a history nerd in school, and did briefly work as a research assistant for a book project studying the role of African-American girls in the Civil Rights movement. For any scenario in life, art, politics, relationships, I’m always obsessed with context and how history allows us to understand the present and, in some cases, forecast the future.

Going off of the above, the song “Primacy” sounds like it has a lot of history in it. Which songs do you consider to be most true to your experience and your history?
So interesting that you picked up on that! I wouldn’t say that my Political Science background has had that much influence on my songwriting, but “Primacy” is an exception. It’s about the ego-driven fragility of empires and the strength of the people who helped build them; I wanted to chronicle the whole scope of an empire — from its birth to the inevitable decline. And there are personal elements as well — I thought a lot of my own parents’ uncertain journey here as immigrants and how I might describe this time period to the next generation.

Why did you turn to PledgeMusic for help in releasing your first EP as Deb Oh and the Cavaliers, Hieroglyphs?
PledgeMusic seemed like something more than just a crowd-funding site; it felt like it cultivated a true sense of community between the artists and fans — and so far, it has! We love keeping our pledgers up to date on all of the latest album news and making them feel like they’re on this journey with us because they really are. They’re the ones making it happen. Not to mention, PledgeMusic gives their artists an option to donate a portion of the funds raised to a charity of their choice, which is awesome.

Has your music transitioned into a full-time gig, or do you have a day job outside of your music?
I pretty much have two full-time jobs. During the day, I work at an audio post-production facility as a music supervisor. It’s an amazing day job to have [as] a musician, because I get to work on the “other side,” licensing music for commercials and producing original music for projects, as well. Every spare second outside of my day job is devoted to full-time job No. 2: the band. We’re independent, so that means we do all of our own booking, coordinating, promoting, managing, etc. Not an easy task.

How has being Asian-American in the music industry affected you, or has it?
It’s made me truly appreciate every milestone we hit. I’m aware of the disproportionate representation of Asian-Americans in mainstream media, and if we can somehow help crack that glass ceiling, that’s great. Having said that, that’s not what drives me to write music. At the end of the day, I want to reach as wide of an audience as possible and simply connect, regardless of demographic, age, creed, race.

What’s the best memory you have of being a part of a band so far?
Those moments during shows when you feel everyone in the band lock in, and you look around and see every person on stage just rocking out and being in the moment. Those moments are pure bliss.

Why is it important for you to give back to the community through your fundraising for Hieroglyphs?
I was lucky enough to have parents who recognized my musical inclinations at an early age and nurtured it, but there are so many musically inclined kids who may not have access to the right outlets to spark that interest. Sing for Hope is the non-profit that we’re donating part of our Pledge funds to, and they have lots of amazing volunteer-run programs in music/arts for youth in underserved communities. Music and art for everyone, I say!

Is there anything else you’d like to add?
We’re ridiculously close to reaching our Pledge target (as of now, 6 percent away) — you can help us reach the finish line!

At the time of this writing, Deb Oh and the Cavaliers managed to reach 100 percent of their goal on PledgeMusic. But that doesn’t mean you can’t still support the group and help them raise even more money for their project and their charity of choice, Sing for Hope.

To help support the band, and get some cool swag in the process, visit PledgeMusic: http://www.pledgemusic.com/projects/deboh

And in the aftermath of Hurricane Sandy, it’s good to know that Oh’s safe and unscathed. No need to worry.

Updated Nov. 2, 2012: Corrected language that implied the EP Cold Glory was released by Deb Oh and the Cavaliers and not just Deb Oh. Corrected a statement suggesting Hieroglyphs is a full-length album, when it is an EP.