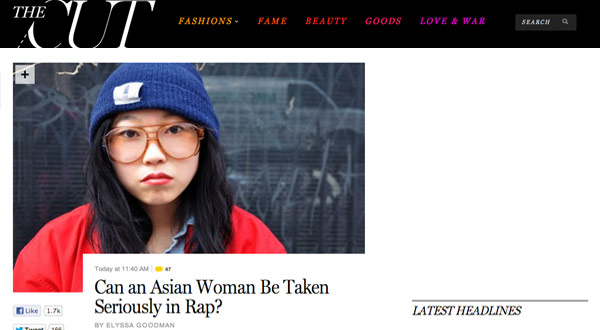 ”Can an Asian woman be taken seriously in rap?” asks Elyssa Goodman of rapper Awkwafina. The Cut (for transparency, I work for New York Media, The Cut’s parent company) ran this article April 2, setting off a small torrent of comments (46 at last count). Most belittle Awkwafina and her skill, while some sexualize her and others still critize the article itself. And while the article asks, it never answers.

The article does little to touch on Lum’s (Awkwafina’s real name, according to Goodman) race and how it affects her music and lyrics, as mentioned by The Cut commenter Mesmacoisa. It fails to mention the song “Yellow Ranger,” for example, which features such lyrics as, “You and that bitch look like Pooh Bear’s cousin,” and, “I bring the yellow to the rap game.” Instead, the article focuses loosely on women’s issues. When the article tries to incorporate more of her Asian-American identity, it does so at the end, leaving little room to draw any such conclusions as the one that follows.

“… Changing the face of rap will change the future for Asian women, too,” Goodman claims. Perhaps. But the article fails to mention the means by which such an enlightenment might occur. Rap needs more females, true, but all musical genres need more Asian Americans. This isn’t the exception, but a small sliver of the world Asian Americans find themselves. The real question should be, “When will Asian Americans become as prolific a force in entertainment as their white counterparts?” And that question, sadly, is one I can’t answer.