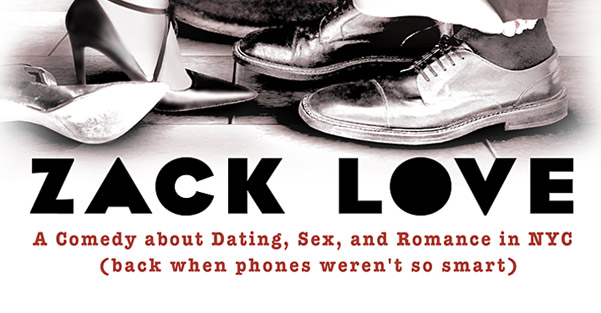 With its tongue-in-cheek title, Zack Love’s Sex in the Title follows five New York men through the challenges of dating in the early aughts where Snapchat, Tindr, Grindr and OKCupid didn’t exist yet. (Plenty of Fish? More like empty pond.)

A Harvard College graduate, Love says in his biography that he didn’t want to be a paper-pusher forever, so set out writing screenplays and sneaking into celebrity-studded parties. It’s partially through these experiences with his colleagues that he wrote Sex in the Title.

One of the standout characters is a Chinese-American who bends stereotypes. Be it through his height or his Better Luck Tomorrow social skill set, able to blend homogeneously between high academic achiever and street slang slinger, the character represents a sexy and developed Asian person we don’t normally see in more popular media.

Below is an excerpt from Love’s book he provided Dumpling via email. You can find his book, which came out Oct. 21, 2013, on Amazon and Barnes and Noble. Pick it up today as the perfect Valentine’s Day supplement.

Narc embodied a complex composite of cultural contradictions. At home with his traditional Chinese parents, he was Yi Wang, the respectful, responsible, and disciplined eldest son who lent a hand around the house and helped his younger sisters with their homework. But outside of the home, his high school buddies nicknamed him “Narc” for always being the first to procure and consume whatever new narcotic constituted the dare du jour. At age fifteen, the exotically handsome and precociously smooth-talking Narc was also the first among them to lose his virginity.

While Narc was still a “model minority” whose grades consistently ranked among the top five percent of students in all of his classes, he had a wild edge to him that most of his fellow Asian classmates seemed to lack. He also felt physically different from them. At six-two, he always stood among the tallest students in his high school class, and he would grow another inch by graduation. He was in love with the NBA and hip-hop culture, and would much rather hang out with high school dropouts “from the ‘hood” who could match him in hoops or rhymes, than discuss the physics problem set or history reading with the other high achievers in his honors classes. He had hundreds of NBA trivia and scorecard statistics memorized and would regularly debate the virtues of various players and teams with anyone who challenged his predictions about any particular game. Narc was also the only non-black member of the basketball gang with whom he regularly played ball on the court near the Newark, New Jersey home where he grew up. Indeed, the other members fondly dubbed him the “Chinese Niggah,” which they soon shortened to “Chiggah.” Narc embraced the term as a token of respect and acceptance from his basketball “brothas.” Whenever the tall, gold-chain-sporting-gangsta athletes ran into him, they greeted him with a wide-armed, high-fiving, “’Sup Chiggah?” To which Narc would reply: “Jus bein’ cool, yo.”

“You catch that tight Nets game last night?” one of them might ask.

“It was off the hizzle for rizzle my nizzle,” Narc would reply with wild gesticulations, to indicate that the game was truly something to behold.

“Word,” they would say, in agreement, with a high five.

Yi Wang artfully lived what was essentially a double life. His parents knew nothing about “Narc,” his gangsta/hip-hop friends, his recreational drug use, or his promiscuous lifestyle (by age seventeen he had already slept with eight females in the area, including two from his high school). They knew that Yi loved basketball, since he was one of the star players on his high school team, and they knew that he didn’t have nearly as many Asian friends as they would have liked, but that was all they knew of his rebellious side. Likewise, Narc’s friends knew almost nothing of Yi Wang, his desire to go to a top college primarily to please his parents, or the dutifully serious person he became while helping with his family’s laundry business. Narc kept the laundry business secret to prevent his friends from showing up and meeting his parents or seeing how humble, soft-spoken, and respectful he was around his family.

As a result of his double life, Yi effectively spoke four languages. Whenever he was in the presence of family and other Cantonese speakers, he spoke Cantonese. If he was with family and non-Cantonese speakers, then he spoke polite and proper – even subdued – English. But on the street with his basketball buddies, or in his high school clique, Narc spoke a street English that combined hip-hop vernacular with copious profanity. If he was writing a term paper or an exam, or delivering some oral presentation to his class, then he switched to high academic English.