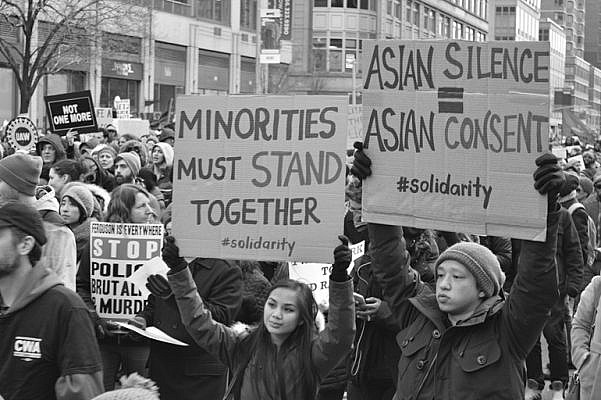 How does social change begin? Is it a dedicated group of activists pushing for a change in policy or a subtle cultural shift arising from a political movement? Although there isn’t an easy or singular answer, we can learn a great deal about how to make change by examining the past.

“Without history, you don’t really have an understanding of who you are in this particular moment,” says Ryan Wong, the curator of “Roots: Asian American Movements in Los Angeles 1968–80s,” which is on display at the Chinese American Museum in Los Angeles.

The value in looking at history may now be cliché, but the importance of examining past successes and failures is something that cannot be overstated. “Roots” contains over 200 artifacts from the movement, which Wong says adds a sense of place to the exhibit and gives viewers a feeling of being directly in the middle of the action. This exhibit explores the activists who shaped the “Asian American” political identity and the intersectional movements and art that arose from this cultural shift.

Activists used creative ways to tell their stories and to get information out to more people. Their legacy can be seen today in handmade posters, hand-circulated newspapers and community-produced films. Volunteers walked door-to-door to distribute these materials and help make others aware of the injustices in their community. In an era where special interest publications were scarce, these alternative histories provided much-needed diversity. Their focus on producing and sharing original media is still relevant today; although the medium may be different, the tools of storytelling are timeless.

As the exhibit attests, Asian Americans have a long history of social and community activism, which makes their participation in current protests, like the Black Lives Matter and anti-police brutality movements, even more relevant. Cases like the murder of Vincent Chin, a victim of an anti-Japanese hate crime, helped mobilize Asian American activists and parallels, to some extent, the murder of Trayvon Martin and how this outrage sparked the Black Lives Matter movement.

“Anyone in this country who isn’t a land-owning white man has their rights [today] because someone fought for them,” Wong says.

Despite stereotypes that depict Asian Americans as docile and afraid to rock the boat, the truth is that the term “Asian American” would not exist today if it were not for a dedicated group of activists in 1968. This movement coincided with the Chicano, women’s rights and anti-Vietnam War protest movements. “It’s important to recognize this history and to recognize ‘Asian American’ as a political identity,” Wong says.

In today’s media-saturated world, it can seem like activism is only a hashtag away. But in order to create lasting change, activists need to step away from the keyboard.

“It seems that with social media, people can question the value of protests because they have an [alternate] way to get information out there,” explains Leland Saito, associate professor of Sociology, American Studies and Ethnicity at the University of Southern California’s Dornsife College of Letters, Arts & Sciences. His research focuses on politics, economics and race relations between Asian Americans and other minority groups in Los Angeles, San Diego and New York.

While news media and social media play vital roles in furthering the conversation and shaping public opinion, they cannot be the only tools of protest. As seen in “Roots,” the Asian American movement was furthered by new forms of media, like hand-delivered newspapers, community-produced films and other types of protest art. In an era where special interest publications were scarce, these alternative histories provided much-needed diversity. Their focus on producing and sharing original media is still relevant today; although the medium may be different, the tools of storytelling are timeless. Visual Communications, a non-profit media collective in Los Angeles, is one of the movement’s legacies. These tools were akin to the social media of today – they allowed community activists to have a voice, document their struggle and communicate directly with others.

“Social media is a tool that can be used for critical discussion,” Wong says, “and to show things that aren’t recorded in mainstream media.”

Protest and dissent are vital to the functioning of our democracy. Sometimes, we need to raise our voices in order to be heard. As journalists, Amy E. Lerman and Vesla M. Weaver, remarked in an article for Slate, “… protest has historically been a tool to make us a more just society. … public protest is sometimes the only meaningful avenue for democratic expression.” Many others echo this sentiment.

“It’s very important to recognize that activism is a vital political tool people can use. … In the next four years, I expect to see a rise in activism, ” Wong says. The ability to raise our voices in protest is a powerful tool for democracy and a proven means of affecting change.

With anti-immigrant sentiments and tensions currently running high, it can seem counterproductive to pause and examine the past instead of constantly pushing forward. This pause, however, allows us to understand our place in history and the ways in which we can use this context to engender change.

Hayward, California. Two children of the Mochida family who, with their parents, are awaiting evacuation bus. The family unit is kept intact during evacuation and at War Relocation Authority centers, where evacuees of Japanese ancestry will be housed for the duration. From the National Archive, taken May 8, 1942

President Donald Trump’s recent ban on travelers from seven majority-Muslim countries and the legal limitations placed on immigrants and refugees from the Middle East is eerily similar sentiment to the internment of Japanese Americans during World War II. President Franklin D. Roosevelt’s Executive Order 9066 put almost 120,000 people in internments camps due to their perceived threat and alleged sympathy to Japan. This blanket judgement criminalized an entire population and further divided an already tense nation. Equating all people of Japanese descent with the soldiers who attacked Pearl Harbor is like getting food poisoning after eating birthday cake and then never eating dessert again – a sweeping generalization based on little evidence.

Although the executive order was ruled constitutional and enforced in 1944, it was later overturned, largely due to the efforts of Fred Korematsu. Korematsu was a resident of Oakland, California, who refused to comply. His case made it to the Supreme Court in 1944, when he was forced into internment. The case was reopened in 1983, when the court ruled in favor of Korematsu and all Japanese Americans.

“A grave injustice was done to American citizens and resident aliens of Japanese ancestry who, without individual review or any probative evidence against them, were excluded, removed and detained by the United States during World War II,” reads an excerpt of the Summary of Report on Internments in U.S. in World War II.

Flag of allegiance pledge at Raphael Weill Public School. Children in families of Japanese ancestry were evacuated with their parents and will be housed for the duration in War Relocation Authority centers where facilities will be provided for them to continue their education. Photo: Dorothea Lange, San Francisco, California. April 20, 1942

We don’t need almost 40 years to elapse before people who are wrongly targeted today see justice. Looking at the events and rhetoric leading up to Japanese internment during World War II can shed light on current events and give us pause before enacting similar laws. Already, activists are drawing parallels between Japanese internment and the Muslim travel ban. People are speaking out against injustice and organizing protest rallies at airports and city halls and working together to create change. This group of people-cum-activists joined together, irrespective of race, gender and sexual orientation – all traditional means of segregating a population – to right a perceived social and moral wrong.

“Social movements are important, in terms of creating a better society and creating a better democracy in the United States,” Saito says. “One of the most American things about America is dissent and criticism of society.”

Not even history will provide a step-by-step guide to creating a successful protest and engendering lasting change, but it can provide insight and the inspiration to keep fighting.