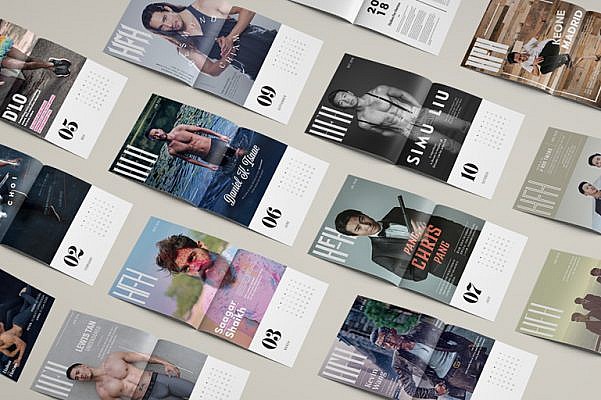 2017 has been dubbed a “bad year for women” due to policy changes affecting women’s health care, misogynistic comments by high profile men (including President Donald Trump) and growing income inequality. While sexual harassment allegations continue to take down high powered men, policy change is not imminent, and access to reproductive care is still a challenge for many women. But there is a small ray of sunshine for 2018.

This year will mark the third release of the Haikus with Hotties calendar, featuring talented and smokin’-hot Asian men paired with original haikus. The project began when Ada Tseng, former editor of Audrey Magazine, wanted to find a creative way to interview actor, Godfrey Gao. Haikus became a challenging way to ask silly questions and soon, the series was born.

“When we first started, I didn’t know if there was going to be a calendar or events tied to it,” Tseng says. “These are the people I want to see in media, Haikus with Hotties gives them more exposure.”

Haikus with Hotties is more than just a collection of Asian hunks with concise poetry, it’s also a platform to address pervasive stereotypes about Asian masculinity and media culture. This year, Haikus with Hotties features poetry written by fans and selected by the hotties.

“There’s a fun element about it that’s missing from other conversations about diversity,” says Desmond Chiam, actor and September hottie. “It’s a diverse representation of Asian men. There are chefs, actors, social media gurus … So if you have a type of guy you like, he’s probably in the calendar.”

According to a research paper by Alexander Lu and Y. Joel Wong, Asian American men experience more stress because their identities do not conform to the “masculine ideal.” In other words, they don’t always fit into the stereotypical expectations of toughness, body image, restrictive emotionality and heterosexuality. Lu and Wong suggest that these pressures add stress and can negatively impact mental health in Asian American men.

“Every Asian man who grows up in a non-Asian society experiences these stereotypes somehow,” says Chris Pang, actor and July hottie. Pang says he has experienced these pervasive stereotypes when auditioning for roles and often sees a lack of diversity reflected in television and movie castings.

Asian American role models are hard to come by for both men and women, especially in pop culture. In 2013, researchers at the USC Media, Diversity, & Social Change Initiative found that, in popular movies, less than five percent of speaking characters were Asian. This statistic doesn’t account for the stock characters and caricature-like roles that many Asian Americans are cast into.

According to IndieWire, many Asian American actors are asked to use stereotypical accents and otherwise play up their “otherness” through actions and broken English. While many Asian Americans are immigrants and may speak with an accent, the issue here is not the accent (or lack thereof), it’s the idea that actors must conform to someone else’s notion of Asian culture.

While Tseng does not feel that Haikus with Hotties trivializes the men’s accomplishments, she does acknowledge that a women’s version of the project would have to be treated more delicately since stereotypes already tend to oversexualize Asian women.

“If you actually look at the photos, they’re not all shirtless photos,” Tseng says.

She explains that this year, the calendar features mockups of well-known magazine covers such as the controversial 2006 Vanity Fair cover which featured nude Scarlett Johansson and Keira Knightley with clothed Tom Ford. This year, artist D’Lo poses with a pink tutu as a challenge to traditional concepts of masculinity.

“The calendar gets attention, and we have to figure out what to do with that attention,” Tseng says. “I just hope people check out the guys’ work, especially people looking for diverse voices in media.”

Although the mood heading in to 2018 may be low, at least the charismatic cast of Haikus with Hotties may add some levity to the new year.